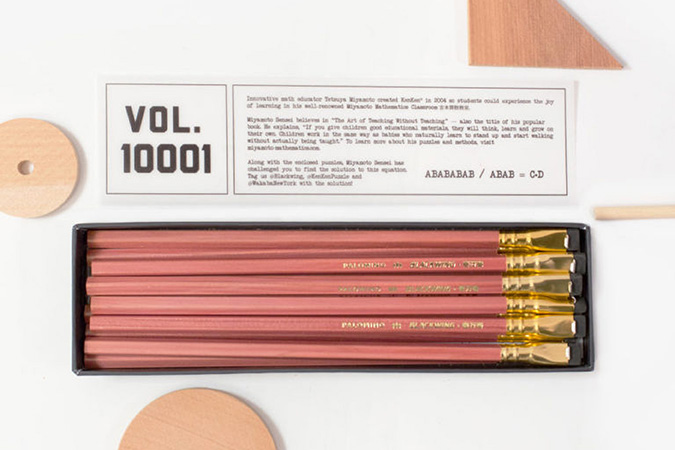 The Puzzle Pencil.
Exercise your mind.

The idea for Blackwing Vol. 10001 was born over a year ago, when a math teacher form New York, and in the same time a huge passionate of Blackwing pencil, wrote an e-mail in which he said that he has a perfect idea for new limited edition. Then, he described Tetsuya Miyamoto’s story, which become a real inspiration for Blackwing’s designers.

“The Art of Teaching without Teaching”

When Tetsuya Miyamoto invented the KenKen® puzzle in his mathematics classroom in 2004, his goal was to improve his students’ problem solving and logic skills. He describes his method as “The Art of Teaching without Teaching,” and his dream is to make the world smarter with his invention.

Today, the KenKen® puzzle is the only puzzle printed daily alongside the New York Times Crossword. Puzzles like these inspire us to apply problem solving and logic in creative ways, letting our minds perform a beautiful dance between their left and right hemispheres.

Blackwing 10001 (壱万壱) pays tribute to Miyamoto Sensei’s puzzles and other creative ways of teaching and learning. 10001 is a numeral palindrome in Kanji as well as in Arabic numerals. It is also tied to one of Miyamoto Sensei’s favorite equations. The pencil features a red stained barrel, firm graphite, gold imprint and unique five-sided “Gōkaku pencil” shape. Translated literally from Japanese, Gōkaku means “passed,” as in a problem or exam. It is also a near-homophone for the Japanese word “Gokakukei,” meaning pentagon. Gōkaku pencils are given to every student who graduates from the Miyamoto Mathematics class.