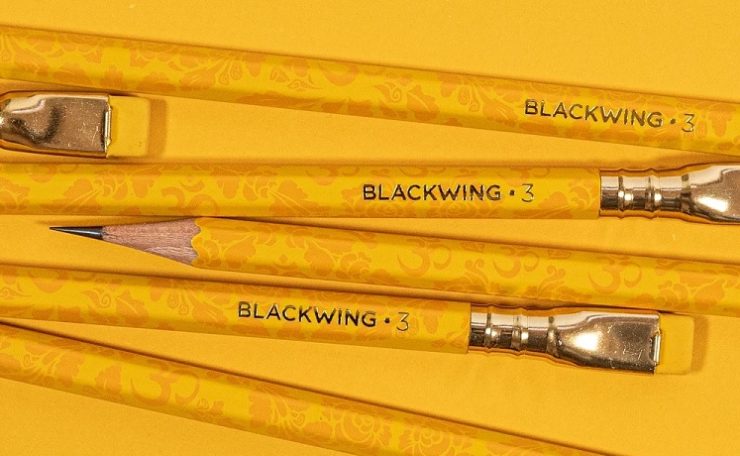 A tribute to the Godfather of World Music.

In June of 1966, George Harrison met maestro Ravi Shankar in Bath, England. Harrison asked Ravi to teach him how to play the sitar, a task Ravi agreed to only after considerable hesitation. Their collaboration resulted in an explosion in the popularity of classical Indian music and instrumentation in the United States and around the world.

Harrison called Ravi “The Godfather of World Music.” Trained in both traditional Hindustani music and classical European theater, Ravi was an artistic genius who influenced countless artists around the world. He infused structure and spectacle into Indian instrumental music and introduced the West to Indian traditions like meditation. He was a true ambassador of India’s rich culture of mindfulness that extended well beyond the stage.

The Blackwing 3 is a tribute to Ravi Shankar on his 100th birthday. It features a matte turmeric finish accented with a pattern inspired by one of Ravi’s iconic sitars. The pattern prominently features the ॐ (Om), a sacred Sanskrit symbol with three phonetic components that correlate to the waking, dream, and unconscious states of being. The Om was an important symbol to Ravi, and served as a constant reminder of the contemplative, spiritual nature of his music. Translated from Hindi, Ravi means “sun,” and this pencil’s gold imprint and ferrule are a meditation on the light he brought into the world through his music and spirit.

While many are already familiar with the Sanskrit symbol through its prevalent use in the practices of yoga and meditation, it also carries with it several deeper layers of meaning. In the ancient Hindu tradition, it is believed that Om (ॐ) is the sound that conceived the universe and is considered the most sacred of all the mantras. In order to better understand Om as a whole, it is important to recognize that it is comprised of 3 distinct syllables that each represent a separate element of consciousness, creation, and spirituality. When enunciated together, create the “Om” sound popular in spiritual chants and meditations.