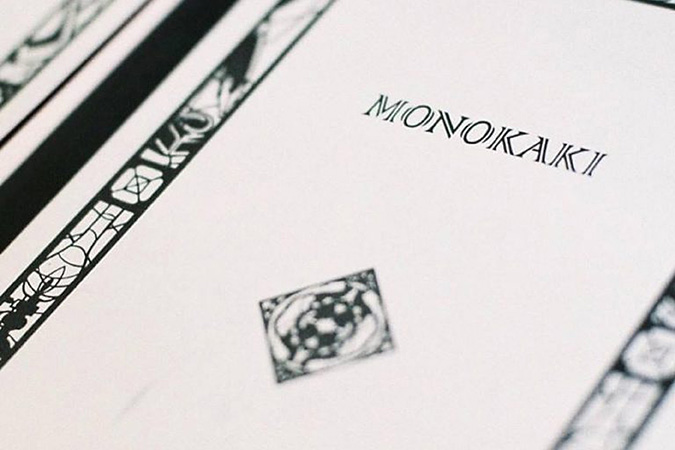 Each product has its own story, which consists of people and their experiences.

During our last trip to Japan, we found a product with definitely a such story!

Monokaki is a notebook shrouded in legend. It is said, that it is a tailor-made notebook, because it was made to the special order of the famous Japanese author Fumio Niwa.

In 1939 grandmother of the present owner of the company met in the café with his good friend Fumio Niwa. During the meeting, they talked about the fear of inevitably forthcoming war. Fumio Niwa was confided in the fear of the deficit of good writing paper. His words inspired other writers to create the perfect paper, which would be extremely thin, but at the same time, not feathering and not bleeding. It was supposed to be paper ideal for people that write with a fountain pen. That’s how Kotobukiya paper came into being. Paper very quickly became a cult product. It is said that if you dream about winning the Nobel or Pulitzer Prize, you should start writing for this paper, because it guarantees victory. Proof of this are Yasunari Kawabata and Kenzaburo Oe, who received the prize in the year 1968 and 1994. Yet, another lover of this notebook Monokaki, Yukio Mishima was nominated three times to the same awards.

The cover of Monokaki notebook, which was to reflect the spirit of the Japanese atmosphere, was designed in the year 1940 by famous manga artist Ryo Takagi. The cover is made from paper that is called Echizen-washi. It is a traditional Japanese washi paper, which is produced in Manufaktura in Fukui consecutively from 1603. The word Monokaki, which appears on the cover is a reference to the history of the emergence of Notepad. Literally, it means  a writer . Also in the graphics, you may notice characteristic writing instruments, such as the paint bucket tool, pen, pencil, oil lamp. All of these symbols may remind us in what situation did the idea for this notebook and to whom it was dedicated.

Consistently to this day, Monokaki notebooks are manufactured in the workshop in one of the districts of Asakusa in Tokyo. The manufactory was founded in the 1882 year and currently manages by Masuya family, who is the fourth generation of founders. Manufactory at the end of 40’s.

Monokaki is another unique item with the soul, an interesting story, and high quality. If you want to find it, click here 🙂