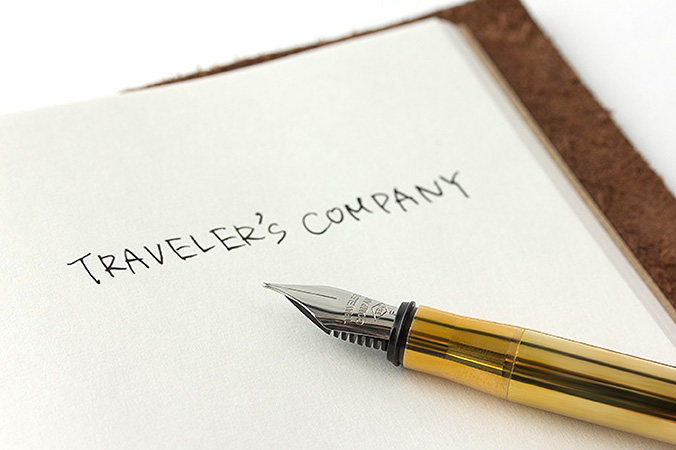 In April Traveler’s Notebook definitely spoils us! We have to say here, quite immodestly, that we really like it

The Traveler’s Notebook Olive Edition, a notebook, a pen holder and a pen, came to us first. Joy was not over! But it was only a preview, because what we all dreamed about, what we dreamed of at night, we had to wait a little longer.

The Traveler’s Notebook pen prototype was seen during the meeting in December 2015 . It already made a huge impression on us. As Traveler’s lovers and users of fountain pens, it imagined our admiration! On the other hand, when we found out by the beginning of 2017 that in April it will be sold … our excitement reached a completely different level. Of course, we had to keep this in secret, which was not the easiest task, because everybody knows what happens when the sentence “just do not tell anyone” is heard, especially when it comes to women.

However, months of waiting paid off, and the pen itself fulfilled all our expectations.

Made entirely of brass, it is the perfect complement to the BRASS collection. As Traveler’s Notebook, the fountain pen gain the individual character over time. Easily converted into a compact “carry around” size and elongated for easy writing, BRASS FOUNTAIN PEN also boasts a depth in texture that solid brass acquires over time and use, complemented with a high-quality finish created by skilled Japanese craftsmen. The top of the pen has a ring for attaching a hook or string, so you can clip it to your bag as a key holder or customize it using beads and other items – let your imagination run free! The ring can also be removed for a clip-free pen if you prefer.

One thing that makes us curious is the nib. Traveler’s Company keeps in secret who is the producer.