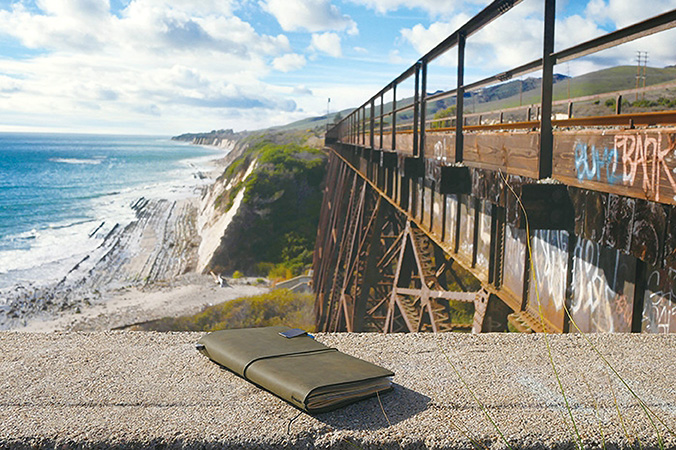 Since a classic brown and black editions of Traveler’s notebook appeared on the market in 2006, the Traveler’s Company has designed many prototypes while taking another look at color.

The characteristics of Traveler’s notebook is a cover that the often is used the more richer character gains. This happens because of the color and texture of the leather. Because there are no two identical pieces of leather, each cover reacts to the environment and changes differently. Therefore predicting these changes and working on obtaining excellent color and tone, which will be suitable for notebook takes time.

The first limited edition was Camel Edition and appeared in 2011, on the occasion of 10th anniversary of the brand in the market. In 2015 we enjoyed the Blue Edition. The year 2017 presents a new limited edition – OLIVE EDITION.

The task of the Traveler’s Company was to obtain the color of old-growth forests, whose roots recall ancient times.

Nature has always been an inspiration for artists, because it becalmed, stimulated imagination, added energy, was a symbol.

Henry David Thoreau in Walden Pond forest built a cabin where he had a journey into himself and led an independent life in harmony with nature, which resulted in a work entitled “Walden, or Life in the woods.” For Japanese photographer Michio Hoshino a wild landscape of Alaska became the inspiration for beautiful pictures. Poets Basho Santoka found the inspiration to create masterpieces by walking through the woodlands of Japan forests. They were also Brautigan and Kerouac, who in an unusual way wrote about the untamed forests of the American region of Big Sur.

In the woods artists always find the energy to create new, great works and to make history.

Inspired by the color of forests, the new Traveler’s Notebook OLIVE EDITION is a very limited edition in 2017. The edition also introduces also the olive-colored PEN HOLDER and BRASS BALLPOINT PEN, which we hope our customers will use together with their TRAVELER’S. notebook. Attach the ballpoint pen to the holder to allow for easy use, even when outdoors.

With your TRAVELER’S notebook OLIVE EDITION in hand, and with that feeling of a traveler walking through the wilderness of untrodden lands, we invite you to spend every day as if making a journey.

Have a nice trip into the unknown with the Traveler’s notebook OLIVE EDITION!

Presale on the end of Feburary.