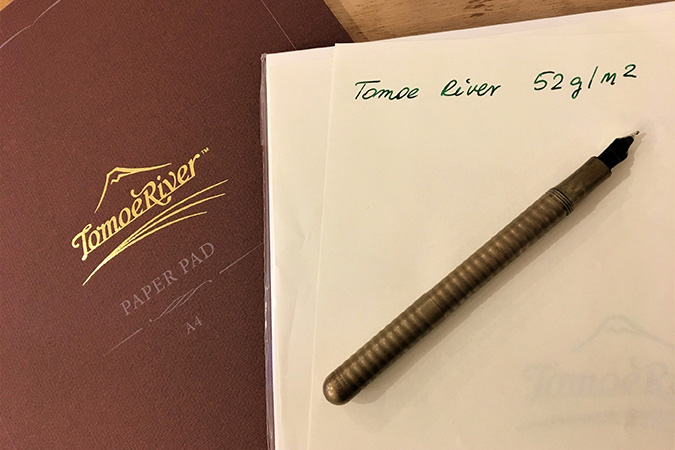 Tomoe River is already surrounded in legend because of the thinnest writing paper you can write on. The paper on which is printed the Bible and dictionaries. Dedicated to paper connoisseurs. An inseparable friend of fountain pens.

As we know, the best inventions arise from the case. Tomoe River is no exception here. This paper has been designed for printing, especially for situations that require a large effort to reduce the volume of paper but without losing any quality. Therefore, originally brochures and catalogs were printed on Tomoe River paper. It was a huge success! Due to the weight of the Tomoe River paper, which is 52g / m, while ordinary sheet of A4 has 80g / m, and the extraordinary strength, printing houses were able to print more pages for the same price. But exactly, how Tomoe River, “met” with a fountain pen?

Here is the case. Someone looking through the brochure took notice of the Tomoe River paper. He thought that it is pleasantly smooth to the touch and tried to write something on it. To his surprise, it turned out that it is just made for writing with a pen, because it is resistant to ink bleeding-through and featering, and its texture makes it keep up with fast writers. In this way Tomoe River has become a desired product.

The same qualities that ensured the success of printing, made the Tomoe River became the best surface for ink. Currently, Tomoe River is available at our store in the form of pads and loose sheets in two colors, cream and white. But this does not end his career. Tomoe River is also a filling of already famous around the world Hobonichi calendar.

In our opinion, if there was a Nobel Prize for the most smooth, durable, thin and friendly ink paper, Tomoe River would certainly be a strong candidate. Do you agree?

And what are your experiences with Tomoe River?