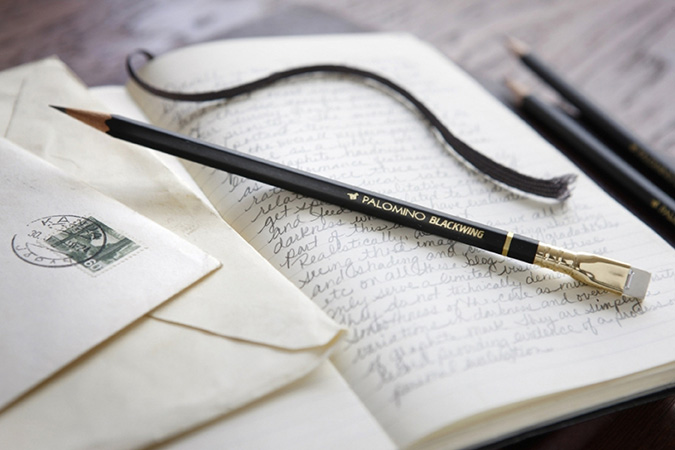 The fame of Blackwing pencils is a phenomenon, and their story is worthy to be told.

Although in Poland Blackwings were not as popular as in USA, we decided to introduce you this brand and make it available in our offer. Blackwing had its ups and downs, what surprisingly became its greatest success over time. But, let us go back to the beginning.

The story of Blackwing pencil starts in 1930, when Eberhard Faber company introduces it on the market. The founder of the company – John Eberhard Faber is a member of a famous Bavarian Faber family. Today the Faber family owns the empire of Faber-Castell. Although it may seem paradoxical, the most famous pencil does not belong to Faber-Castell company. The Eberhard Faber company change its owners many times. Despite the fact that from the very beginning Blackwing is valued among artists and writers, in 1998 the decision about ceasing production is made.

In shops the pencils are out of stock very fast. People buy Blackwings on the off-chance. The residues, that left on the retail market reaches exorbitant price – 40 dollars per one item! In consequence, it becomes both the best and the most expensive wooden pencil in the entire world.

Blackwing is surrounded in legend, and despite ceasing production, the demand for this pencils constantly rises.

When artists and writers begin to notice the similarity of quality between Blackiwng and Palomino pencils, the request for the attempt to resume the production of Blackwing is made.

Charles Berlozheimer, the founder and CEO of Palomino company, uses his contacts and pace on the market, and originally reproduces only the famous Blackwing 602 pencil. Shortly after that, he expands the selling offer with the most firm graphite pencil – Blackwing Pearl and Blackwing, as well as with fancy easers which give the individual character of your pencil.

The highest quality lead and replaceable eraser – these are characteristic features of Blackwing, which are valued by many artists in the entire world.

Blackwings were used by, among others: John Steinbeck, Stephen Sondheim, Leonard Bernstein, and also Chuck Jones, an animation director who, with the help of this pencil, created Bugs Bunny and another characters of Looney Tunes.

What will your Blackwing look like? And what will you create with it?